This week our group giving props to Amanda Connor, who came down and worked with us a bit at the Atlantic Center for the Arts.  Amanda has done incredible work on Powegirl, The Pro, Vampirella, and other such titles.

You can dig on that at the Fanart Friday tumblr HERE.  It's booby-licous. 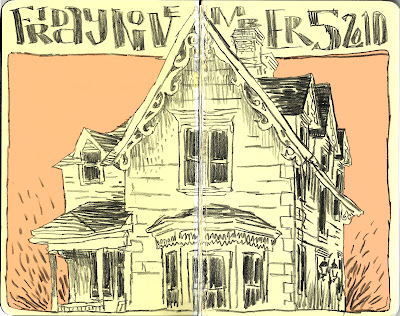 Provo is a place of run-down manors and thriving downtown businesses.  The stately ruins dominating every city block south of the university represent the soul of Provo- a fading tradition of homogenous wholesomeness affectionately occupied and haphazardly maintained by a diverse, young, ever-changing population. We appreciate the antiquated beauty of what has been, do our best to protect it, and add to it our own energy and ideas.  Old things are preserved, renovated, resurrected, and made new again and again by a stream of freshly arrived domestic students, immigrant families, foreign faces with academic visas, and the great-great grandchildren of mormon pioneers.

These houses are everything I love about this town.  And I get to live in one.

I love that house!
Half a block north of Tommy Burger, am I right? It's like 170-something North and 4th West, no?

I'll steal this from you right now if you want!

I take it you are home again?

Beautiful sketch as always, Jake! Also, I still have your DVDs. I need to return them to you pronto!

You make provo look so good jake....If provo was smart they'd redesign this city around your sketchbook...

What are these "Fan Art Friday's" that you speak of?

How marvelously well-put about Provo. There are always going to be haters, and you know haters gotta hate. But there is a delicious whole-oat blend of goodness of which only Provo delivers which i will not deny.