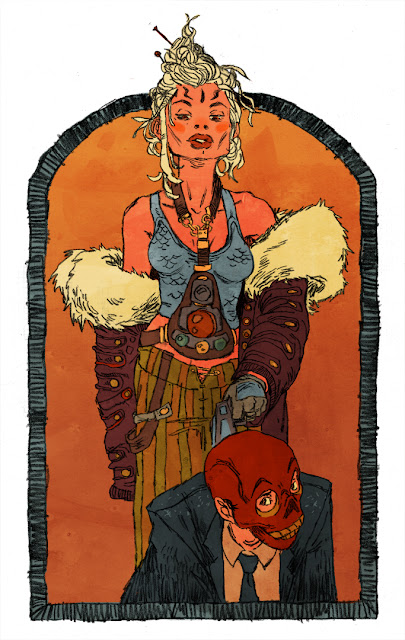 This is why I love Paul Pope:
When I was a kid, digging through garbage bags of my uncles monthlies and sneaking into my aunt's room to read her trades, I didn't read comics because I believed in the potential of the medium, or because Chris Claremont was doing really interesting things with story, or because Elfquest was shedding light on the human condition.  I did it because those comics were cool.  They were cool as all holy hell.  They FELT cool.
I grew up, and now I read lots of comics for lots of reasons.  But very few comics make me feel like I'm seven years old again, trying to parse the meaning of a page of ElfQuest or Vigilante.  By and large, they don't make me FEEL the cool coursing through my veins like they used to.
Paul Pope's comics DO.  They are cool.  They are cool as all holy hell.  Reading a Pope comic feels like hearing REAL rock and roll for the first time again.  It's Bowie-esque science fiction, full of guarded, rock-star drifters and tough girls with short fuses, lips like pillows and nothing to lose.
This week's fanart features two characters from Pope's Heavy Liquid.  Neither of them have real names.  She's the Boss of the Fork Tungs, an all-girl Brooklyn sado-street game, and he's just plain unlucky.  Because even the minor, nameless characters in a Paul Pope comic are dripping with design, story, intrigue, and above all, cool.
So read 'em.
Oh, and Paul himself-- in addition to being a gracious, intelligent, generally swell guy-- is just as effortlessly cool as his comics.
Posted by JAKE WYATT at 10:44 PM

Jake, I love Fanart Friday. I've come to look forward to it. I might have to start reading comics. Beautiful stuff.

An obvious improvement on the original designs...alas Heavy Liquid was too heavy for me.
Maybe I'll revisit Mr. Pope's work when I grow up a little bit.

Thanks for enriching me life, laddy!

word verification: untaz
meaning: what you do when you need to get your boots off

Dude, you are so cool. Congrats on the anthology project. I'll go support it. i love your fan art fridays - it means guaranteed weekly jake art!

I swear, Jake Wyatt. You just keep making pictures that look like this, and your style will sway the trend in comic art. You're bound for greatness among the adolescent. :) I prefer the company of 4-year-olds.