I've been reading me some Conan and playing me some Zelda.
And those two things have, apparently, been merging into one, deeply confused concept in my sleep-deprived brain.
Conan is ridiculously fun to read.  It's written in this incredibly hyperbolic, sexually charged fortissimo.  Robert E. Howard turns out descriptions of busty sword maidens fit to make a man blush, then turns around and details Conan's physique with the same level of eroticism.  It mirrors the kind of egalitarian exploitation you find in a Frazetta painting: everyone is equally naked, sexy, and violent.
Which is how it SHOULD be.
The Zelda games are a great foil to all that, because they are steeped in that whole sword-and-sorcery thing Howard invented while remaining COMPLETELY sexless and militantly wholesome.  The two things are at opposite ends of the S&S spectrum, and I had a lot of fun cramming them together.
Maybe later I'll do Link the Barbarian. 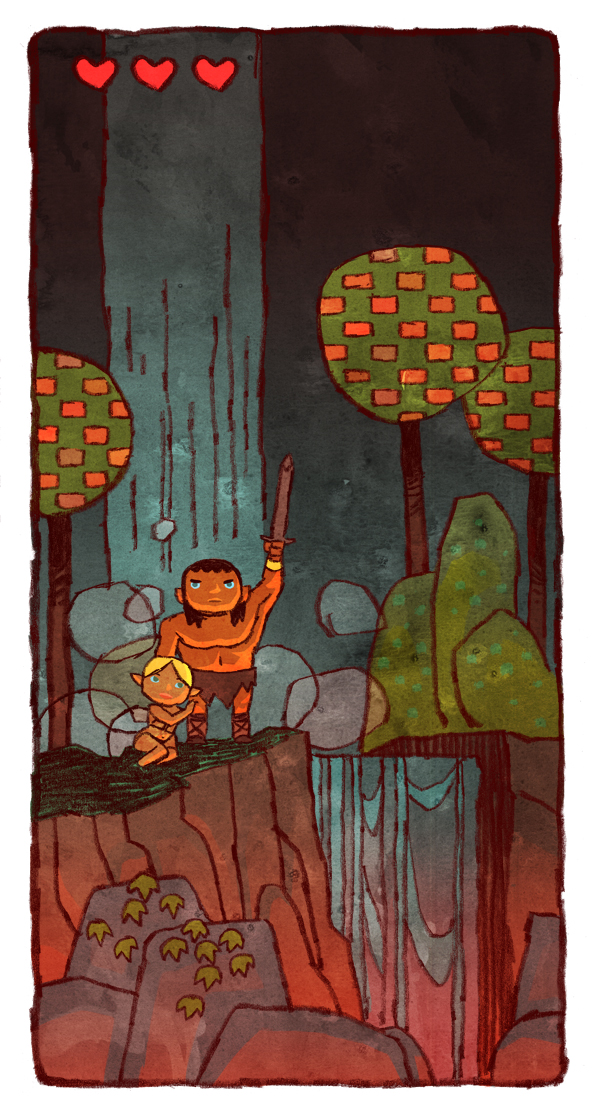 Next week is Spiderman week, folks.  There will be a trivia competition to win the drawing.
And Joey Majdali is disqualified for being an insomniac, so someone with normal sleeping habits may ACTUALLY WIN this time, dear readers.
Until next time, may Crom grant us all that is needful for man.
PS-- I KNOW that the correct term is Hylian, y'all.  But 'Hyrulian' is a better stand in for 'barbarian,' or 'Cimmerian.'  Artistic license, I say.
Posted by JAKE WYATT at 7:05 AM

This is empirically awesome.

I love this stuff. Awesome work!

i don't know which I enjoyed more, reading the preamble or looking at the art. your artistic mastery knows no bounds!

Your colors are getting to the point where I want to lick my screen. Woah, is that ok to say? Too late. It's true.

I love this SO HARD.

I SO wanna play this game.

Esp. if it features a Thulsa Doom/Ganandrof mashup.